OU News
You are at:Home»Education, languages and health»Health»Award-winning series Hospital returns to our screens

Co-produced by the BBC and The Open University’s Broadcast and Partnerships team, Hospital returns to our screens for a fourth series on Thursday 10 January at 9pm on BBC Two. The award-winning series explores the day-to-day life of six hospital Trusts across Liverpool, as they care for over two million people, stretching from North Wales to the Isle of Man. 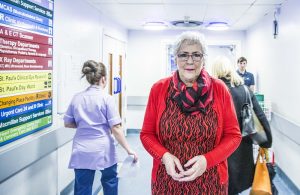 Filmed between October and December 2018, the six-part series documents the realities facing the NHS right now, bringing audiences closer than ever before to the issues and challenges that dominate the headlines. Shown from multiple perspectives, Hospital tells the stories of patients and staff from some of the country’s ground-breaking establishments, including the Royal Liverpool University Hospital – the biggest Emergency Department of its kind in the UK; Liverpool’s Women’s Hospital – the country’s only specialist trust that provides care to women and babies; and The Walton Centre – the only dedicated spinal, neuroscience and pain management trust in the UK.

In episode one, we experience peak time in the Emergency Department at the Royal Liverpool University Hospital – two floors of the hospital are flooded, taking newly repaired lifts out of service. Critically ill patients have to be re-routed to get to Intensive Care and domestic staff are diverted from cleaning wards to help with the flood. The disruption has a knock-on effect, as there are now less clean beds for new patients.

As it celebrates its 40th birthday, we learn that the Royal Liverpool University Hospital is due to be demolished, but the £350 million project that started almost five years ago has been delayed due to the collapse of multi-national construction company, Carillion in January 2018. 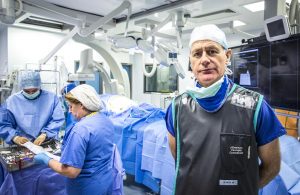 Across the city, the new state of the art Alder Hey Children’s Hospital is treating three-year old, Charlie, who has a rare and fast growing brain tumour. He’s about to undergo a high-risk operation under one of Europe’s top paediatric neurosurgeons. If the surgeon can remove Charlie’s tumour, his chances of survival are massively improved. For the surgeon, this is one of the most complex operations that can be done.

Against the backdrop of historic demands stemming from limited resources, we see the extraordinary work of Liverpool’s 20,000 NHS hospital staff, as they continue to push the boundaries in medicine, despite many barriers.

With the support of The Open University Academic Consultants, Professor Cathy Lloyd, Professor of Health Studies and Julie Messenger, Professional Lead for Nursing, there are extensive resources and information on healthcare and nursing on OpenLearn, including a quiz to test your health, an interactive game to put you in the shoes of the decision-maker in a high-profile medical case, and a hands-on look at the human cost of type 2 Diabetes.

“As one of the Academic Consultants from The Open University, I am delighted to have been involved in the development of this series of Hospital, which provides viewers with an in-depth look at the challenges of providing care to people living in Liverpool. The series covers key areas of our curriculum including our Nursing, and Health and Social Care degrees; more insights into these and our other teaching materials can be found on the OpenLearn website.”

Hospital is on BBC Two on Thursday 10 January at 9pm.

Hannah is part of the Media Relations Team at The Open University, working with the Faculty of Wellbeing, Education and Language Studies. With experience both agency and in-house, Hannah has worked on campaigns for a number of large corporate companies and brands, including RBS, NatWest, Travelodge, Audible, AA and the Royal Academy of Dance. She has completed a Masters in Publishing Studies from Oxford Brookes and is currently studying towards a DipHE in Computer, IT and Design. In her free time she enjoys photography, reading and going to the theatre.