OU News
You are at:Home»Around the OU»The OU speaks out»Regenerating Seaside Towns – why part-time study could be an answer

The regeneration of seaside areas has been under debate in Westminster, with one topic of focus being access to education for those in coastal communities. Some seaside areas are a long way from a conventional university, and The Open University has traditionally helped many people in these communities gain a degree through flexible part-time distance learning.

However there has been a 27% decline in the number of people from coastal communities in England accessing Higher Education since 2012 when student funding reforms were introduced.  Professor Ian Fribbance, Executive Dean of the Faculty of Arts and Social Sciences, spoke to the House of Lords Regenerating Seaside Towns Committee about the issue on 13 November.

Part time is crucial to regeneration

Professor Fribbance said: “At the higher education level specifically, there is clear evidence that in England the part-time market has shrunk for lifelong learning. There’s been a 27% overall decline of higher education study in coastal communities – in part-time students that’s nearer 60%, and this is down to changes in funding arrangements. Mature students are more debt averse.”

Professor Fribbance emphasised how partnerships can help these communities, with colleges, schools, universities and businesses joining forces: “In many areas there will never be bricks and mortar universities but a regime where The Open University works with colleges and businesses could facilitate the regeneration needed. This could bring access to local apprenticeships, entrepreneurial skills, and routes into higher education.”

Growing their own talent

Committee member The Lord Bishop of Lincoln, Christopher Lowson, spoke about a ‘brain drain’ from coastal areas, where people go away to university and spend their working lives in more urban areas.  Professor Fribbance noted that some employers are responding to this by ‘growing their own’ talent. He said: 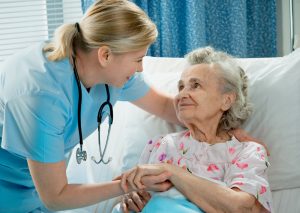 “There is a sense that employers like the NHS are growing their own staff. For example, the OU supports nursing programmes, and we have had successes in the Isle of Wight and Cornwall, where there is a big need to develop nurses from other categories of staff. Students who stay in place and study flexibly, part-time, are more likely to stay.”

Future world is one of retraining

Professor Fribbance emphasised that education should not be conceptualised as just for the young, saying, “The future world is one of retraining and learning new skills; this is really important in these coastal communities, many of which are higher education cold spots. We must expect in the future that people can study again into their 20s, 30s and 40s – who knows what job an 18-year-old will be doing when they are 48?”

Committee Member Lord McNally remembered the day that Jennie Lee persuaded Harold Wilson not to cancel the OU. He said: “I’m a great believer we have in the OU a great National asset. Education itself has got to get smart and flexible if it is going to persuade the Treasury and others to give…the funding to meet this new changing economy.”

You can read the OU’s written submission to the Committee online.

Find out more about how the OU is training nursing associates.

Read about OU graduate Gina Awad who lives in Exeter.