OU News
You are at:Home»Around the OU»OU grad’s study inspired by humanitarian work 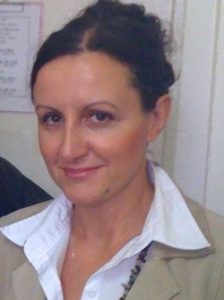 Open University graduate Ines Katic-Vrdoljak, from Sarajevo, saw first-hand the difference humanitarian aid can make when she worked on deliveries to those impacted by the Bosnian War in the mid 1990s. Supporting the OU’s focus on Human Rights Week, Ines explains how the volunteer work she undertook led her to study both a BSc and a Masters degree in development-related subjects.

During the conflict in Bosnia and Herzegovina I worked as an interpreter for an ODA (now DfID) British Convoy Team serving under the umbrella of UNHCR based in Metkovic situated in /Croatia near the border with Bosnia and Herzegovina. My job included interpreting for the convoy leader and assisting with negotiating passage for the convoy through official and ad hoc check points and road blocks. After a year I was assigned as a Dispatch Officer involved in the delivery of humanitarian aid to Bosnia.

My British colleagues and I faced many challenges. Very often we found ourselves in positions where we were taken hostage, threatened, shot at, stoned, and robbed. During that period, we lost a number of colleagues: drivers, interpreters and other staff. Especially challenging was getting to Sarajevo under siege and delivering aid most often under heavy shelling.

However, the nature of my work and the assistance we managed to provide to the civilians that suffered the unthinkable horrors of war made my job all the more worthwhile.

During that time I had the opportunity to meet many international aid workers, western politicians, civil and military authorities and journalists. I always used opportunities to voice my opinions and to convey concerns and experiences of both the humanitarian workers on the ground and those who desperately needed assistance.

This experience had a tremendous impact on me personally in various ways. As a result, I felt an urge to engage socially and try to make a difference as infinitesimal as it may be. Once a telecoms engineer, I thus decided to change my career.

Studying social sciences at the OU seemed a good start. And proved an excellent choice.

I first obtained a BSc (Honours) in International Studies and then a Master’s degree in Development Management. I have remained with development agencies to date (UNHCR, DfID, NATO, EU, World Bank).

I am currently working for a national NGO dealing with health (Fami Foundation) as Project Manager of Strengthening Nursing in BiH project (ProSes). The aim of the project is to strengthen the role and profession of nurses so they gain competencies and get the position in the health system they deserve (as in the UK). It has been a fierce struggle as bringing about social change implies resistance and struggle, but thanks to the broad knowledge and skills gained from the OU I feel confident and up the task.

Studying with the OU was one of the best of my experiences ever. Having recommended it widely, I already know of a few people from Sarajevo who have enrolled and completed their studies with the OU.