OU News
You are at:Home»Arts and social sciences»Society and politics»Homelessness in our towns and cities: policing disorder?

Dr Daniel McCulloch, an Open University lecturer in criminology and social policy, on the complexities of policing homelessness – looking after the welfare of rough sleepers while trying to move them away from prime city spaces…

Rough sleepers and the police often come into contact on our streets. Policing homeless populations is a complex task, not least because the police have competing priorities to consider when addressing rough sleeping.

On the one hand, many businesses, individuals, and local groups might feel that rough sleeping poses a ‘threat’ – both through the potential actions of individual rough sleepers, and through their presence as an indicator of ‘urban decay’ or ‘disorder’ in a particular area.

Indeed, the ‘designing out’ of homelessness is a noticeable feature of increasingly sanitised prime city spaces across the Western world through the use of ‘defensive architecture’, such as anti-homeless spikes, or benches which are designed to be difficult to sleep on. In some cases, police services have been involved in related tactics, for example through ‘wetting down’ (spraying water onto bedding spots) in areas in London. 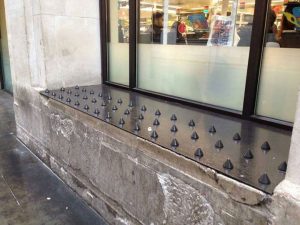 Juxtaposed to this, as the most likely state agency to encounter rough sleepers on a regular basis, the police can often play a key role in ensuring the welfare of such individuals. Rough sleepers are vastly more likely to be the victims of violence and crime than the housed population, and are often grappling with the pains that sleeping rough brings. In addition, rough sleepers might be facing their own issues such as mental and physical health needs, or other difficulties such as addiction.

Thus, policing rough sleepers can be difficult – with officers potentially conflicted by a sense of duty to manage the demands of the many influential local stakeholders focused on ‘policing out’ rough sleeping, weighed against the needs of some of the most vulnerable people in society.

Some police tactics have previously attempted to combine these competing agendas, with a police role both aiming to address the welfare of the individual, and attempting to move them away from prime city spaces – an example of the way in which rough sleepers can be policed both as a ‘risky’ and ‘at risk’ population. However, such tactics have come under criticism, both from campaigners who feel that the welfare needs of rough sleepers should be prioritised, and from organisations who wish to see enforcement measures used to ‘robustly’ deal with rough sleepers.

Indeed, confronted with the presence of rough sleepers, rather than demanding change, some influential groups deal with this uncomfortable sight by attempting to invisibilise rough sleepers in prime city spaces. An approach which addresses the failures of our society might look rather different, and might prioritise the needs of our most citizens.

The OU recently hosted the launch of the Centre for Policing Research and Learning and next week there’s a free OpenMinds Talk in Glasgow on How can we solve crime? with a keynote speech by OU honorary graduate Karyn McCluskey, Director of the Violence Reduction Unit Scotland.