OU News
You are at:Home»Around the OU»University news»Share your story in support of lifelong learning 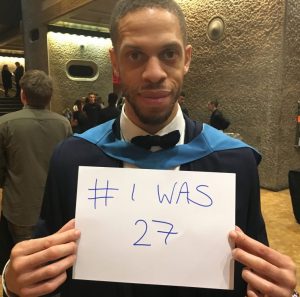 Nathanial was 27 when he started studying to progress his career. He says he wouldn’t have his current job as an IT engineer without his IT and Computing degree.

The Open University is calling on members of its community to demonstrate the value of flexible distance learning (lifelong learning) and the role it can play to help the country meet future economic challenges.

Flexible learning enables people to reskill and upskill, whatever their background or personal circumstances, and this will continue to prove essential in the current economic climate; education and skills are fundamental to economic success and adult skills matter more than ever.

We know the benefits of OU study to jobs, careers, family, community and employers, and it’s important that decision-makers and influencers know that too.

To demonstrate the value of flexible distance learning and the role it can play in addressing the UK skills gap, The Open University is launching the #IWas campaign on 20th June and is being supported by OU honorary graduate, alumnus and Paralympian Darren Harris.

He started studying when he was 39 and knows first-hand the benefit of higher education later in life.

How you can get involved

Members of the OU community – staff, students and alumni – can support the campaign by sharing a photo and the age they were when they started studying (#Iwas 31…) and a sentence about their personal student story, on social media, to raise awareness of the number of students – of all ages – who need part-time and distance leaning to upskill or reskill.

For example, Nathanial Lawrence, from London, shared his story with us. He was 27 when he started studying to progress his career and needed to be able to work alongside studying. Nathanial graduated with a degree in IT and Computing earlier this year and the qualification helped him secure his current role as an IT engineer at Cisco.

If you’re not on social media but would still like to share your story, you can email us with your details. Most of the campaign activity will take place on Twitter and you can follow it here.

How OU students contribute to the economy – right now

As reported earlier this year, the Government’s ‘productivity plan’ was published in 2016, focusing on how to increase UK productivity and growth over the next decade and create a more prosperous nation, particularly when technological advances will have an impact on future jobs.

While school leavers will bolster UK productivity in the future, the need is immediate. The majority of Open University students are not straight out of school but already in work and wanting to upskill or change careers – they can contribute to strengthening the economy as soon as their study begins.

In a blog post for the University Alliance in February, OU Vice-Chancellor Peter Horrocks said:

If the Government is serious about developing a highly skilled and productive workforce in the short to medium term, they are unlikely to find the answer solely in the current batch of school leavers. Or the one after that. Or indeed any cohort of typical 18-year-old students over the next five years. The best chance of achieving this ambition therefore lies in those institutions with students of all ages. These also tend to be the same institutions who are able to widen opportunities to those who may have missed out in the past.

And 75 per cent of OU students are working full or part-time whilst studying and 72 per cent of them say “studying with the OU has directly increased my ability to do my job”.